As soon as the doors opened, the stewards assuring the security of the audience were overwhelmed. All the fans, excited and feverish, pushed and ran to get as close to the stage as possible. It felt like they could have ripped each other apart! Once everybody settled down into their appropriate spot, the fans started talking about the new One Direction album Made In The AM, announced to be released in November, and about their new track Infinity, that had just dropped on social media. The tension was almost unbearable as time slowly passed. 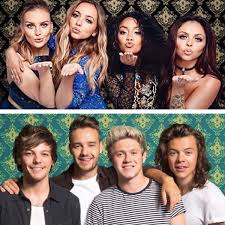 Finally, at 7:45pm, Little Mix came onto the Apple Music Festival stage. Kicking their gig off with Salute, they instantly energised an audience that needed almost nothing to go overboard. The fours girls sang all their hits including Change Your Life, the first song they have ever written together. Speaking of first times, they also performed Grown for the first time in ever. They also gave their fans a little taster from their second album by singing a few lines from Love Me Like You. And acapella, please. They ended their mind-blowing set with Black Magic, leaving the crowd on a high note. Little Mix are simply amazing live: they sing, harmonise and hit their notes every time without fail; they also dance, engage with the audience and make it all seem completely effortless.

At 9pm, the vicious Apple Music Festival digital clock started counting down the seconds to One Direction’ set. A human wave came crashing onto the barriers as Louis, Niall, Liam and Harry arrived on the stage. The first notes of Steal My Girl were only starting but the audience was already ecstatic and singing. The boys sang their greatest hits from their five albums: Where Do Broken Hearts Go, Midnight Memories, Fireproof, Little Things, Night Changes, No Control, Drag Me Down and the unmissable Best Song Ever and What Makes You Beautiful.
Louis thanked the fans for the No Control campaigns that pushed the song into the top of the charts worldwide. Liam was dancing the night away, winking and smiling at people. Harry did burst his best moves, whilst thanking the fans and keeping an eye on his sister who was on a date (hope it did not affect the said-date!). Niall was poorly: still hoping around because of a broken foot, he also seemed to have a fever and had to go off stage to be sick. Still, the four men managed to put on an amazing show and to make every single person in the Roundhouse feel special. Their vocals were on point, the energy was unbelievable and they interacted a lot with their audience. The only downsides (hey, it is ok, no one is perfect!) are that there was no call back and that they did not perform their brand new song Infinity.

All in all, it feels like Little Mix, One Direction and everyone in the Roundhouse made History last night. The memories will linger in the spirits of many and for a long time! Thank you all!

Previously published on www.music-news.com on the 23rd of September 2015.

Working for free, a good idea?